Posted by Maria
Back when I started this blog (nearly a year ago now!), I mentioned one of India's religious figures, Satya Sai Baba. (pronounced "Sigh BAH Bah," as if he were a despondent sheep). His devotees consider him a living god. Everyone else considers him an idiot.

He uses sleight of hand to materialize 'holy' ash and other items and has gotten good enough to convince millions of followers, including a lot of high-ranking political figures, most of whom can't think of any other way to make ash.

Sai Baba was back in the news in October for not appearing in the moon, when he said he was going to. I know most of us in the States are sick of these tabloid "celebs-not-in-the-moon" stories, but India's news media sometimes is less sophisticated.

It all started when an official of the Sai Trust announced that the godman would make a "moon appearance" between 6-7 pm and asked devotees to proceed towards the airport. (?)

Thousands of the Baba's devotees from neighbouring villages rushed to the airport but were disappointed as cloud cover hid the moon. They waited for an hour before going back home to watch "Deal or No Deal."

No word from The Bah Bah as to why we failed to get mooned, as it were. Not even a press release that said "dude, it was cloudy." However you say that in Hindi. And why gather them at the airport? If you're going to look at something in the sky on a dark night, do you really want light pollution from runway lights? And don't you want your loyal followers shouting something other than "I see him! I see--... OW! I have just been caught in a propeller!"

Not much of a story, but later on several videos appeared from people who claimed they *had* seen him the moon, just a couple of weeks late.

This video was taken on October 25. As expected, it's a blurry view of the moon - no details visible. This video, taken on the October 27, is much clearer but I still don't see much more than the moon and some clouds. Luckily, the videographer has done a detailed analysis , including overlaid drawings where you can see Sai Baba clearly: 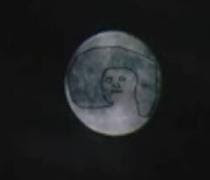 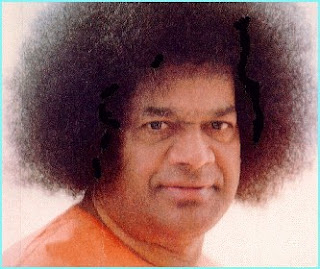 No information on where he's going to appear next, but you have to admire his living godstones. The Virgin Mary is content to appear in wooden doors, tree bark, tortillas, and the like. Sai Baba's sort of upped the ante on her. I'm looking forward to Mary's response, especially with Christmas upon us. Sai Baba might get a good old immaculate ass-stomping.

Debunking people like Sai Baba isn't all that difficult. It's not like he's bending spoons or anything impressive like that. But his followers aren't following him because of the persuasive power of his tricks as much as their eagerness to believe in people like him. But thankfully there are people who try.

The best debunking I found was this fantastic documentary called "Guru Busters." It's a three-part documentary (see them all here, here and here) and Sai Baba is only one small part of it - they talk about dozens of gurus and the dangers of superstition in India. It's well made and features some great science and skepticism. It features the work of the Indian Rationalists, who go around to villages in India duplicating 'supernatural' tricks that Sai Baba and others claim that they can do. They pierce themselves, generate ash, and eat fire, all to demonstrate that there's nothing mystical about these things.

The Rationalists have a rough time of it. They fight all forms of superstition in India, from frauds to faith healers. They're literally trying to save people's lives and they're doing it with their own money, time and energy. They're also putting their safety at risk every day by holding village demonstrations and their own skeptic challenge. Much like Randi, the Rationalists will pay Rs. 2,000,000 to anyone who claims to possess supernatural power of any kind and proves this in a controlled location.

One warning about this video: The last part is a little graphic. They go after a faith healer who claims he can cure snake bites. The healer is after the 2 million and wants to be tested in front of a huge crowd. The test: they force a deadly snake to bite Sai Baba.

No, really. The snake bites a dog that looks like a Siberian husky. The scene is very hard to watch and yes, the dog dies. They don't pull out the antidote at the end or turn it around in any way. The dog dies and possibly many people are saved by choosing a real doctor next time. But if you're soft on huskies, like I am, you might want to skip that bit.

Not that I could condone it, but it might have been more effective if they had the snake bite two dogs, let the healer fail to heal one, but administer antivenin to the other. But I guess the healer would have just claimed he healed the wrong dog.

Anyway, the madness is alive and well in India, in case any of you thought otherwise. It's still a lovely place, and you should all go see. But be careful what you do out under a moonlight sky -- you never know who is watching. (Not that Jimi Hendrix would judge you.)


Cross posted at Skepchick.org
This blog was co-written by Skeptical Writer
at 10:15 AM

"Masala" is the Hindi word for spice. It's also used colloquially to mean "trouble" as in "I'm adding masala," - I'm causing trouble. I'm using this blog as a tool on my journey to learn more about skepticism, critical thinking and science, particularly as it relates to India and people of Indian origin. And the fabulous Masala Skeptic logo was created by Misty Sinclair.

Where I go to 'Worship'

Member of the Atheist Blogroll